NotaBle Acts’ production of Lac/Athabasca, staged in cooperation with Theatre Free Radical, is set to run from October 14-17 at Memorial Hall, UNB. An award-winning new play by Fredericton playwright and director Len Falkenstein, Lac/Athabasca will be performed for the first time in New Brunswick, after critically-acclaimed runs in Toronto and Vancouver.

Inspired by the t 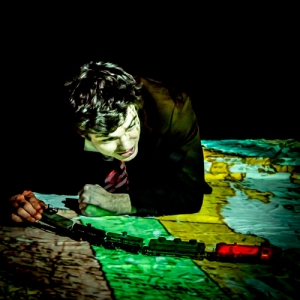 rain derailment disaster that devastated the town of Lac-Mégantic, Quebec in 2013 and by the ongoing debates over the environmental and social impact of the Alberta oil sands and the transportation of oil in Canada, Lac/Athabasca takes audiences on a cross-Canada journey that begins in the Rocky Mountains and ends in a small town in northern New Brunswick.

The play’s cast of five actors—Rebekah Chassé, Jake Martin, Alex Donovan, Emily Bossé, and Jean-Michel Cliche—each play several characters in a series of stories that range freely through time and space, but that all centre on rivers and railways that connect Canada from West to East, including a pair of nineteenth-century fur traders pursued by an unseen terror along Alberta’s Athabasca River, two scientists studying fish kills and cancer rates downstream from the oil sands, and the residents of a small town united in grief after an entirely preventable disaster. At first seemingly disconnected, the play’s multiple narrative strands eventually come together in ways that are shocking, thought-provoking, and deeply moving.

Lac/Athabasca premiered in Vancouver in 2014 and was recently performed at Toronto’s juried SummerWorks Theatre Festival, where it attracted national media attention and earned rave reviews, including selections from NOW Magazine as one of its “Best of the Fest” and for “Best Ensemble.” Earlier this year, the play was awarded Second Prize in both the Herman Voaden National Playwriting Contest and the Ottawa Little Theatre National Playwriting Contest.

Lac/Athabasca will be performed at 7:30 nightly from Wednesday, October 14 through Saturday, October 17 at UNB’s Memorial Hall. Tickets are $18 regular, $14 for seniors and underwaged, and $10 for students, and are available at the door. For more information or to reserve tickets, call 506 458-7406, email nbacts@unb.ca, or visit www.theatrefreeradical.wordpress.com