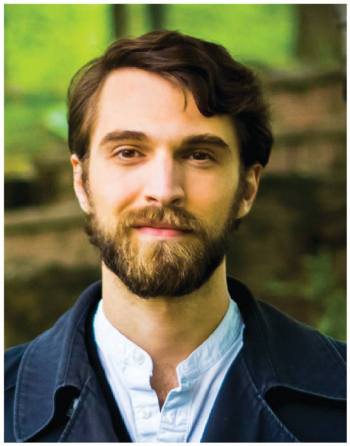 Jean-Michel Cliche is no stranger to the NotaBle Acts stage. For the past several seasons he has participated as an actor, a director and as a playwright.  Though his work with Next Folding Theatre Company, Solo Chicken Productions and his recent work with the Hot Garbage Players as a writer, performer, and educator, Jean-Michel has become one of the foremost proponents of live theatre and live performance in the city of Fredericton.

At our festival this season, Jean-Michel is both a featured playwright and a director. His piece S.C.O.P.E. will be featured as part of this year’s site-specific walking tour of performances. He is also directing Alex Pannier’s play Casualties, one of two plays featured in this year’s Acting Out series of one acts plays.

We started our conversation with Jean-Michel by asking about this year’s site-specific work.

“S.C.O.P.E. is a pair of monologues that I wrote that are both set in these sci-fi future worlds,” he said. “The idea is that it’s taking very common everyday life problems and cranking them up to 11 in a sci-fi universe. I really like the idea of how sci-fi is able to take subjects and look at them under a microscope and analyze them in such a weird/fantasy way that doesn’t feel preachy.

“One monologue is about a teenage girl who is dealing with the feeling of being a teenager where she doesn’t feel like she can be herself and she takes it all out on a robot who is waiting for the bus. The other one takes place in Officer’s Square and features a time traveler who has come back in time to warn Fredericton not to cut down the trees in Officer’s Square. Two things that were born on their own and I thought they’d fit together well thematically.”

While both appearing under a single title, S.C.O.P.E.’s monologues will be offering something new to the festival’s traditional site-specific model.

“I’ve written a few site-specific plays for NotaBle Acts before but I wanted to try and do something different, so this time, instead of writing one play for one location, I thought about these micro-moments that could show up and almost act as junctions between some of the other site-specific plays,” he said.

“I had so much fun writing these two plays that I’ve already started to write more of them in hopes of creating a collection for future festivals. It’s been a fun process and I think they’re different enough from the way other site-specific plays have taken place in previous years that they’ll be a fun way to break up the traditional model which is something I think is important.”

S.C.O.P.E. will be presented July 30, 31 and August 1 as part of this year’s series, Street Scenes: Three Site-Specific Plays.

As one of this year’s featured festival directors, Jean-Michel will also be directing Alex Pannier’s play Casualties as part of the series Acting Out: Two One Act Plays which takes place August 2-4 and Memorial Hall.

“It sort of deals with these two siblings who are commiserating together about this trauma they’ve had in their lives.  The whole play takes place through memory so sometimes the actors are playing adults and sometime they’re children. We get to see that as they go back through various experiences in their lives. They’re popping all through time exploring their past trauma and their past shared history.”

Without giving too much away, the play also incorporates the use of masks when the actors are remembering their parent’s words and actions.

“Alex did a really good job creating all these different tools for telling the story, but he also did something not of lot of young playwrights feel comfortable with. He let go in the sense that he created these elements but didn’t hammer in a lot of specific stage direction. So there are a lot of different ways we can play and explore.