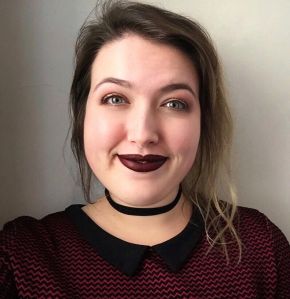 Arianna is back for her fourth season with NotaBle Acts.  Her play Blue Ribbon is part of this year’s Street Scenes series. Described as “a wacky tale of subterfuge and spoilt produce, with viciously feuding grandparents who when competing for affection take it too far by forcing their only granddaughter to become a double agent sabotaging each other’s vegetable stands,” Blue Ribbon kicks off this year’s site-specific walking tour and will be performed in the Boyce Farmer’s Market parking lot. Feuding framers? What’s not to love?

We asked Arianna about her play and what else she is doing at this year’s festival.

What can you tell us about the play and the idea behind it?

Blue Ribbon is loosely based on stories my mother would tell me about her grandparents. When she was growing up she would spend her summers working on both of their gardens, and would get into all sorts of trouble because both grandparents had a flare for drama. The story is based on real people and real relationships, with my own added twist for fun and flavour.

How many plays have you written for NotaBle?

This will be my third play that I’ve written for NotaBle Acts. I wrote Parallel Lines for the Taking it to the Streets series two years ago, and last year I wrote The Marcy Case as a site specific, located at the Fredericton Public Library. I really love participating in this festival. It provides wonderful opportunities for artists of any level to hone their skills in a safe and supportive environment. If it weren’t for NotaBle, I don’t think I would have tried my hand at playwriting!

Did you Blue Ribbon this specifically for the Site-Specific series or was it an idea you’ve been playing with for a while now?

The idea had been percolating for a while, as I had always found the stories my mom told to be very amusing. Originally I had written the script (though it was significantly different) for film. I decided to adapt it for the stage, and thought the Boyce Farmers Market would be the perfect location.

You’re also reading in the Play Out Loud series. How’s that been going?

I’m reading for the part of Anna in Alex Donovan’s The Forerunner. By being stripped of the ability to show action, all of care and attention is given to the way things are read. We got together as a group to read it through, and Tilly Jackson (our director) would challenge us to consider the character’s we’re bring to life (what they’re like, what they want, what inspires them, what scares them, etc) and to make sure those choices come through in our line delivery. I’ve never participating in a reading before, but the process is interesting.

Arianna Martinez is a filmmaker, playwright, and educator living in New Brunswick. She has produced several short films that have screened across Canada and has participated in NotaBle Acts theatre festival for four years.