Jean-Michel Cliche’s play Space Girl is our Mainstage show this year and our first to be delivered as an online-only event. 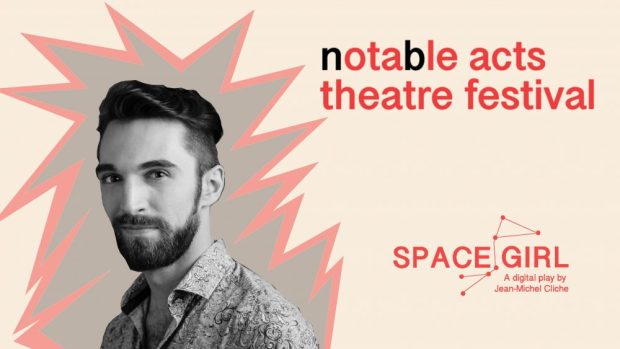 This year’s NotaBle Acts Theatre Festival will be unlike anything we’ve done so far. Choosing to move ahead and program a theatre festival in the time of COVID meant we had to look at new ways of doing things. There’s good and bad in this. One positive take away from the experience is that almost our entire lineup will be made available through live streaming, helping us reach more audiences than ever before. We’ve never done anything like this before so in a way, it’s like exploring an entirely new planet. Cameras, upload speeds and YouTube have all become important aspects of our 2020 theatre process. Sadly, moving to a digital format also means we are not able to invite audiences into the stunning theatre at UNB’s Memorial Hall to see fully produced work come to life. The silver lining to it all? We have been given the opportunity to dedicate more time to the artists and their words. And when you get right down to it, that’s what this festival is all about.

“While the festival obviously looks different this year, I think it may be exactly what many of us need. Performing live theatre can feel very high stakes and can make what is supposed to be a joyful experience quite stressful. This year, everyone is forced to slow down. We aren’t worried about spectacle or filling seats. Instead, everyone is just focused on the art,” said Jean-Michel Cliche, whose play Space Girl will be featured as this year’s Mainstage production.

Cliche has been involved with NotaBle Acts in various roles over the years from actor to director and has served as a member of the festival’s board.

“The expectations are different, so it’s leaving everyone more room to play and explore. I think this is a good reminder for us that NotaBle Acts is a playwriting festival. It’s intended to be a platform for writers to stretch their legs and explore. NotaBle let’s the playwright see their work come to life for the first time, but hopefully not the last time.”

His play Space Girl tells the story of a young woman who seeks to escape the Worst Year Ever on Earth for the comforts of life in space, only to discover it’s not quite so easy to leave behind all our worldly problems. The play was written as a direct response to the events of the last few months and will kick off the festival’s online programming on July 24, with audiences tuning in to follow its titular protagonist’s adventures via Zoom, and interacting with the performance to shape the narrative.

“There’s a shared sadness between theatre practitioners and audiences right now and we want to connect in whatever we way can,” said Cliche. “Digital theatre may not feel exactly the same, but I think it’s important to explore. This new medium offers some really interesting artistic opportunities that aren’t available on stage. This has made rehearsals for Space Girl more like a laboratory than a typical theatre studio.

“Theatre is all about creating an illusion for the audience, and using a camera gives us a brand new bag of tricks. It’s created a much more collaborative and experiential process than the typical, ‘you stand here, you stand there’, business of live theatre. And once again, because everyone knows it’s an experiment – audience included – we don’t feel the pressure of blowing everyone away. We’re just happy to be geeking out about theatre and we’re excited to share our discoveries with an audience, wherever they might be,” he said.

Space Girl will receive three performances at this year’s festival July 24, 26 and August 1.