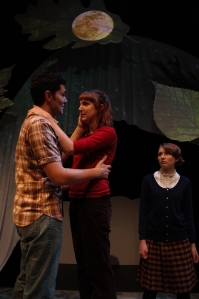 Eleven days of passionate, exciting, hilarious, and powerful theatre begins on July 22 with the start of the 2015 NotaBle Acts Theatre Festival.

The festival kicks off with Angel’s River, written and directed by Andrea Boyd. Set in rural New Brunswick in 1969 and inspired by real events, Angel’s River is the intense, poignant, and humorous story of 17-year-old Carrie Lynn, who becomes pregnant accidentally, gives birth to a little girl, and confronts the painfully wrenching decision over whether to give her child up for adoption. In its depiction of generational poverty, domestic violence, and the restricted lives and choices that women and the poor faced and continue to face in our province, Angel’s River is a hard-hitting and moving, but ultimately inspiring, New Brunswick story. The play features gorgeous set and projection design and lighting by Mike Johnston and Chris Saad, and beautiful original music by Mike Doherty, along with inspired performances by Andrea Dymond, Alexa Higgins, Warren Macaulay, and Amelia Hay. Angel’s River will be performed at the Black Box Theatre, Saint Thomas University, July 22-25, with performances at 7:30 nightly. The July 22 performance is pay-what-you-can, with tickets for other performances ranging from $10-$20, available at the door or in advance at Westminster Books.

Angel’s River is inspired by a true story, and I’d like to thank my Aunt Jeanne for providing so many crucial details about life in Waasis in the late 60’s. As a play that is close to my heart, I want to thank the entire company who have brought my words to life. They are generous, receptive, funny and courageous. I’m in the theatre right now, in fact, and we are adding lighting, projections, and sound – all of which propel us forward into the magical creation of our theatrical world. Also, thanks to Len for choosing this play and giving me the unique opportunity to direct my own work. Angel’s River premiered at Live Bait Theatre in 2010, and it has been a pleasure to revisit it, and to have the chance to do some rewrites. Getting a second production in Canadian theatre is a rare gift, and when you spend years working on a script, it’s very rewarding to see it appear again. Thanks to Don Hannah and Playwrights’ Atlantic Resource Centre for providing dramaturgical notes to lead me in the right direction.

* appearing with the permission of Canadian Actors’ Equity Association.