Eight New Plays will Debut Sunday and Monday at the Festival…

..Starting with Street Scenes: Two Site-Specific Plays. Since premiering at the 2011 NB Acts festival, Street Scenes has been an audience favorite, staging new plays in unconventional settings around downtown Fredericton, with the works written specifically for and about those places.

This year’s pairing of plays will be set in the scenic environs of the Green by the St. John River. Alex Donovan’s The Field tells the story of a years-long relationship in the space of fifteen minutes, aided by movement and music. The Field is directed by Jean-Michel Cliche and stars Kat Hall and Alexa Higgins, with original music composed and performed by Caitlin Leonard. 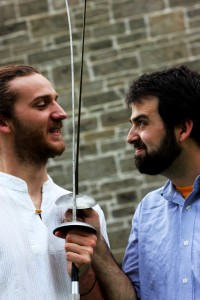 A night of readings at the Beaverbrook Art Gallery (July 26, 7:30) will feature the winner of the 2015 NotaBle Acts High School Playwriting Contest, Kira Smith’s entertaining fairytale sendup The Damsel in Distress Who Saved Herself, and Iago Speaks, a work in progress by the NB Acts’ 2015 Playwright/Dramaturge in Residence, Daniel Macdonald. Originally from PEI but now based at Saskatoon’s largest professional theatre company, Persephone Theatre, Macdonald is an award-winning playwright whose works have been produced widely both nationally and internationally. 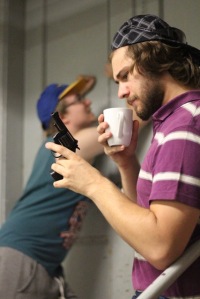 Opening on Monday and running daily at noon in Barracks Square, Taking it to the Streets is a production featuring free outdoor lunchtime theatre (July 27-31), staging the four winners of NB Acts’ 2015 ten-minute playwriting contest. Always popular with audiences and suitable for all ages, this year’s plays offer an hour of fast-paced, winning comedy. Alexa Higgins’ Bergman Gets Results takes us inside the minds of the members of a hilariously dysfunctional yoga class; Jake Martin’s Someone Gets Shot is a comic thriller that ends with a bang; Jeff Lloyd’s A Curious Incident at the Park in the Daytime makes a bestselling book the possible dealmaker/breaker in a chance romantic encounter; and Gordon Mihan’s Rest in Peace, Mr. Fish features a toilet as its central set piece (for obvious reasons..).

Depending on the weather, you can slap on some sunscreen and head down to Barracks Square (corner of Carleton and Queen Streets), or, if it’s raining, catch the shows under the tent in the Square. Lawnchairs are available on site, or bring a blanket if you’d like to sit on the grass.

Click the links elsewhere on this site everything else you need to know, and to find out what’s happening later in the week!