Amelia was first introduced to acting through NotaBle Acts and now she’s making her directorial debut with the 10-minute play, ‘Interview For Two’ by Alex McAllister. 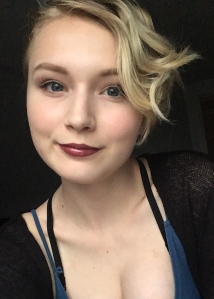 Part of what makes each NotaBle Acts Theatre Festival unique is the variety of voices included in each new season. From the actors on stage to the writers, directors and the many behind-the-scenes players who each contribute their own skills and creative voices to the process, no two editions of the festival are the same. Each new year offers artists a chance to be involved and try their hand at exploring new possibilities within the context of theatre creation.

Fredericton actor Amelia Hay got her first taste of acting through NotaBle Acts and has since become a fixture on the local theatre scene. Earlier this summer she pulled double duty acting in both Bard In The Barracks productions (The Comedy of Errors and Richard III) and now she’s trying her hand at directing.

“I started out [with NotaBle Acts] doing the 10-minute scripts,” she said. “Actually, it was a script that took place in a coffee shop just like this play so it feels like I’ve come full circle with my theatre experience now that I’m directing.”

Click the link below to hear the interview and be sure to catch Interview For Two, as part of this year’s Taking It To The Streets: Four 10-minute Plays series. Full performance details below.