Miguel is directing the Tilly Jackson play Here Be Dragons, as part of this year’s Taking It To The Streets: Four 10-Minute Plays series. 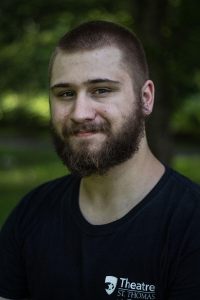 After a busy start to the summer acting in the role of Richard in Bard in the Barracks’ highly successful production of Shakespeare’s Richard III, Miguel Roy is now focusing his attention on the Tilly Jackson play, Here Be Dragons, which he is directing as part of NotaBle Acts Theatre Festival’s Taking It To The Streets series of 10-minute plays.

Miguel got his start performing as a member of a local improv troupe while in high school and has since become an active member of the city’s theatre community.

“I came from a French high school which, at the time, didn’t have much in terms of dramatic arts, so I joined an improv team and got my start acting there,” said Miguel. “It wasn’t until I got to university and performed in Almost, Maine directed by Ilkay Silk that I actually got to try my hand at theatre. Since then I’ve kept challenging myself to try new things from musicals to Shakespeare. I figure if I’m going to get better at what I do, I always have to find new, bigger challenges.”

“I’ve only directed one show prior to this and it was also a short play as part of a festival held with the Directing Seminar at STU this past year. So this is only my first go at directing outside of a classroom environment. I’ve gotten lucky in that I get to work with Tilly Jackson, the fantastic playwright behind Here Be Dragons, and a fantastic cast of actors, so my first steps haven’t been alone. The biggest challenge, I’ve got to say, is seeing the show and finding what it needs, since now I get to see the whole picture and not just my character’s perspective.”

By the time each production debuts as part of the festival, each will have undergone two weeks of rehearsals with cast, director and creative teams taking notes and receiving feedback from peers and participating artists with each new rehearsal delivering a more polished version of the story.

“The show’s been moving along very well, actually,” said Miguel. “We’ve gotten a lot of the general feeling and ideas down and now it all comes down to memorizing lines and finding new choices in the work. I’m directing a show that has a dragon in it, so it’s a bit difficult working on two weeks of rehearsal time, but I think we’ve made more than enough progress to get this thing in shape with time to spare.”

With the 2017 festival now underway, Miguel sees NotaBle Acts not only as a celebration of New Brunswick theatre, but also as a reflection of what makes Fredericton’s performing arts community uniquely inspiring.

“The importance of this festival can’t be exaggerated. It literally can’t. The works you’re seeing are created by, produced by, and performed by the people we know and love. It’s for people who want to try something for the first time, people who want to try something different than they normally do, people who just want to watch some fantastic theatre made by their community. It’s funny, it’s intriguing, it’s sad, it’s dragons and superheroes and monsters. It’s Fredericton.”