Tilly Jackson is a playwright and director with this year’s NotaBle Acts Theatre Festival. 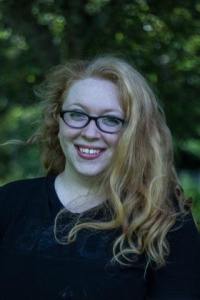 Tilly has a long relationship with the festival, having participated in just about every aspect of programming from acting to administrative duties, and we’ve very happy to feature her work this year.

How did you first become involved in theatre?

I vividly remember going to see a high school production of Grease when I was in elementary school in Ontario; that’s where I first remember thinking “I want to be up there.” After moving to Fredericton in middle school, I became friends with the theatre kids and pretty naturally fell into the yearly musical productions, working my way up from ensemble to a lead role in my senior year. Then, in 2011, after my first year of university and really missing the community of my high school theatre family, I spontaneously went to the open auditions for this festival I’d never heard of, and Len [Falkenstein] cast me in the first-ever installment of the Site-Specific plays. Throughout that process, I was inspired to take his UNB theatre class, then I got hired as the Festival Administrator the following summer, and I’ve been involved in basically every capacity of the festival over the last six years!

You’re directing one of this year’s Acting Out productions. Have you done much directing in the past and how have you found the transition going from on-stage to off-stage craft?

This is actually the fourth year I’ve gotten to direct for NotaBle Acts, and overall it’s the sixth play I’ve directed, though they’ve all been of varying lengths. I love directing – the more I work off-stage, the more I realize I love it just as much, if not more, than being onstage. I’m an English Lit. graduate, so I’m all about analyzing text, and as a director you get to do that so intensely. It’s also really creatively satisfying to have so much control over the final product that the audience sees. I’m very grateful to NotaBle Acts for providing an opportunity for people to develop their skills in this way, and for the chance to take on increasingly complex roles; for example, for my first year directing, I was assigned a 10-minute play, and now I’m directing an hour-long one-act.

It Happened at a Party involves some pretty heavy subject matter. How is the show developing and can you speak to the effect it is/may be having on the team involved?

I was very lucky to be able to cast not only very good actors, but actors who are sensitive and mature, so while this is a heavy play, everyone involved has been dealing with the subject matter in an extremely thoughtful way. It’s a powerful script, and an important one, so when we get bogged down with the horrible things that people can do to one another, it helps to think of this play as educating and spreading awareness about toxic relationships and about consent. We also have a very talented playwright who is able to balance funny moments with heart-wrenching ones, so we’re able to laugh a lot in rehearsal as well. It is definitely a challenging and draining rehearsal process, but the cast and crew are more than up for the challenge, and I’m very proud and happy with the results so far.

Can you tell us why you think this festival is so important to theatre in the province?

This festival is absolutely invaluable when it comes to encouraging people to explore all aspects of theatre. I’m actually a playwright in this year’s festival as well, as my 10-minute play Here Be Dragons was selected to be produced in the Street Theatre series. While I’ve always considered myself to be a writer, I don’t think I would have even thought of delving into playwriting if it wasn’t for the opportunity NotaBle Acts presents with its Annual Playwriting competition, and the space it’s created for new and experimental pieces. It’s also phenomenal as a young theatre artist to have paid work, and to be able to try your hand at stage managing, directing, writing, or acting. NotaBle Acts is honestly one of my favourite things about summer in Fredericton, and I hope everyone reading this comes out to experience this incredible festival.

Acting Out – Two One Act Plays

Taking It To The Streets- Four 10-Minute Plays