Kat is directing Gamma-Man, one of the plays in this year’s Taking It To The Streets: Four 10-Minute Plays series. 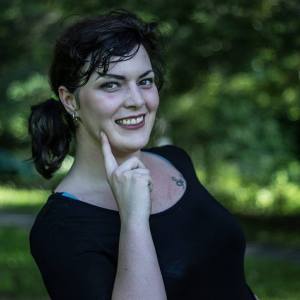 This is Kat’s fourth year with the Festival. Earlier this summer she acted in both productions presented by Bard In The Barracks, Fredericton’s outdoor summer theatre company, bringing the works of William Shakespeare to the audiences at Barracks Square and Odell Park.

In advance of the play’s debut, we asked Kat to share a few thoughts on directing the Brandon Hicks play, Gamma-Man.

Can you tell us a bit about the play and what it’s been like directing it?

The play is a story that gives us a window into a mostly happy 25 year marriage. The husband is working long hours, the wife gets fed up and confronts him about the secret he’s keeping, and it’s not even close to what her trusted Dr. Phil self-help book said. It’s been a joy to direct, it’s definitely got a lot of inspiration pulled from the archetypical Atlantic Canadian grandparents. It’s been all about finding those moments that come from a long relationship that can survive just about anything. Everyone involved has been amazing, making my job very easy, despite the short amount of time we’ve all had with the script.

What would you say is the biggest challenge in directing a two-person play?

The most important thing in directing a two person play I think, is that the dynamic between the characters is so, so vital. I was lucky in my casting in that my actors are a couple, so that comfort and energy is already there.

Where you familiar with the work of Brandon Hicks prior to this year?

Last year, I acted in another of Brandon’s Street Theater plays, Speed Marriage. That show was definitely a little more surreal than this one, but there’s an excellent trend between the two in fun, quirky, feel good scripts.

What do you enjoy most about NB Acts Taking It The Streets series?

Taking It To The Streets is fantastic, as it opens up a super accessible way for people to get into theater, in all sorts of ways. New directors, playwrights, and actors can all come in and work alongside more experienced members of the community, as the shorter script length isn’t as demanding as doing a feature length show. As well, audiences are able to come see a short play or several, at no cost to them.

Taking It To The Streets- Four 10-Minute Plays